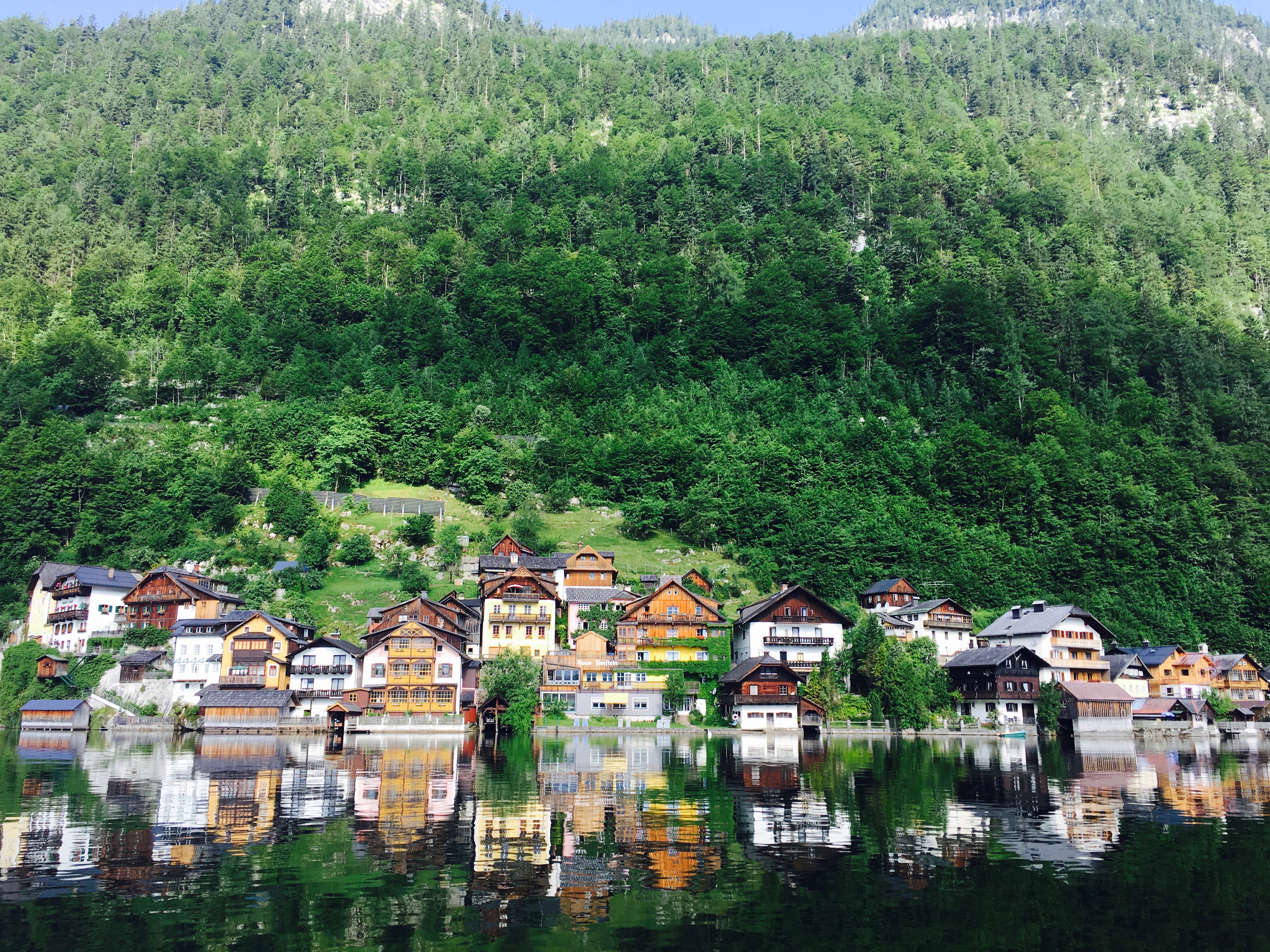 It is easiest to get to Hallstatt from Salzburg. We purchased our tickets ahead of time (not necessary, but helpful). The tickets did not assign us to one specific train time like some trains do, but instead just were tickets for the route we were taking and they were valid for a few day time period. There are a few different ways to get there from Salzburg:

Train from Salzburg to Hallstatt

This option has a train connection in Attnang-Puchheim and ferry from the train station to the small town of Hallstatt. This is what we opted to do and I would highly recommend it. It was scenic, easy and comfortable.

Arrival: We caught the first train from Salzburg (6:12 the day we traveled) to Attnang-Puccheim. This took 45 minutes to 1 hour as we got a bit delayed. Then we caught the 7:15 train to Hallstatt from Attnang-Puccheim. We almost missed it since our first train was delayed BUT it seemed like the second train was waiting for our train to arrive (must be a common connection). This train was 1 hour 30 minutes, allowing us to arrive at the Hallstatt train station shortly before 9:00 am. The station is very small and after arriving you can follow the signs pointing to “ship departure” towards the lake (1 minute walk). The ferry is timed to arrive shortly after trains arrive (and take you back to trains shortly before trains leave). Simply purchase tickets directly on the boat (one way = around 2 euros, round trip = around 4 euros).

Alternatively: We were debating whether to a) get off at Hallstatt (which we ended up doing) and take the ferry to the town to explore and see the Salt Mine first OR b) take the train one stop further to the last stop at Obertraun and then catch the bus to the Dachstein Mountain Cable Car where we were going to immediately go up to the first level and do the ice caves followed by going to the second level to a few lookouts before heading to the actual town of Hallstatt. If you are trying to fit both the salt mine and the ice caves in on one day, this is what you should do to save time, but you need to make sure you time the bus appropriately, or else you could be sitting around for an hour. We wanted to do both the ice caves and the salt mine but we weren’t confident in the bus schedule so we opted to get out at Hallstatt and I am so glad we did. Hallstatt and the area around it looked absolutely beautiful in the morning and riding over on the ferry to the town was a fantastic way to arrive.

Back to Salzburg: we took the same route back (ferry > train to Attnang – Puchheim > train to Salzburg). This worked very well. The last train out was at 6:32 pm the day we traveled, allowing us to get back to Salzburg around 9:00 pm. The LAST ferry departed at 6:15 pm from the dock.

Train from Salzburg to Hallstatt/Obertraun

This option has a train connection in Bad Ischl and is just another route option. You can take this option if the timing is better and choose if you get off in Hallstatt or Obertraun based on the information listed in the first train segment above.

Bus from Salzburg to Hallstatt

Train from Salzburg to Bad Ischl and transfer to bus

This tiny town is easily accessed on foot. However, to get to some of the various activity options, you will need to use other forms of transportation. To get from the Hallstatt train station to the small town area, you will take a ferry across the lake. In order to get to the Dachstein Cable Car, catch bus 542 or 543 from the station in town. The bus stop is located at the opposite side of town from where the ferry drops you, but is right near the funicular which you take up the mountain to reach the Welterbeblick lookout and Salt Mines.

We unfortunately did not stay here. Hallstatt can be very expensive and booked frequently especially in the summer. Obertraun is the town over, and a good deal cheaper to stay in. You can stay here and take the 542 or 543 bus over to Hallstatt. I would have loved to spend a night in Hallstatt and get the opportunity to hike in the area. However, a day trip was wonderful from Salzburg and worked fairly well. 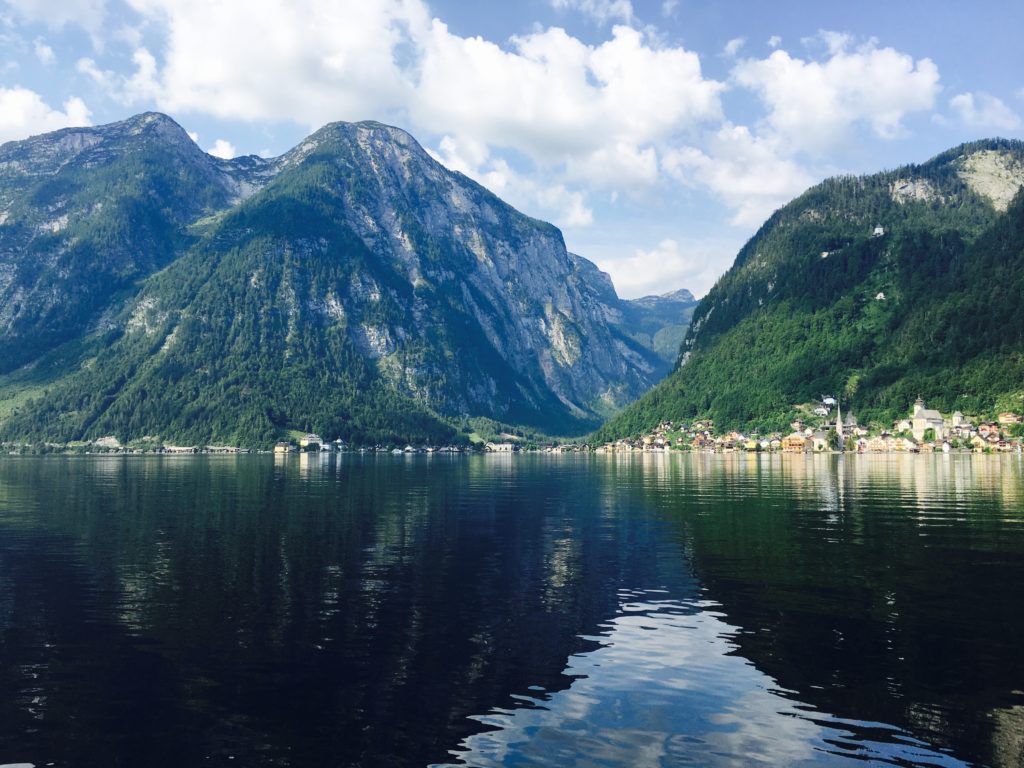 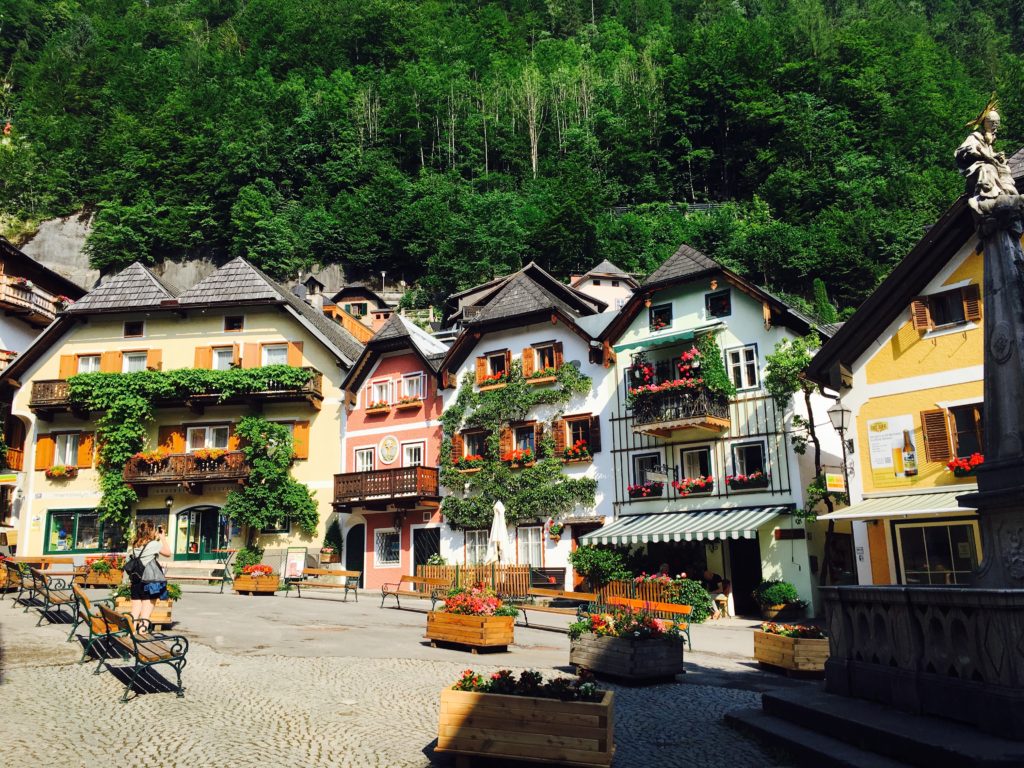 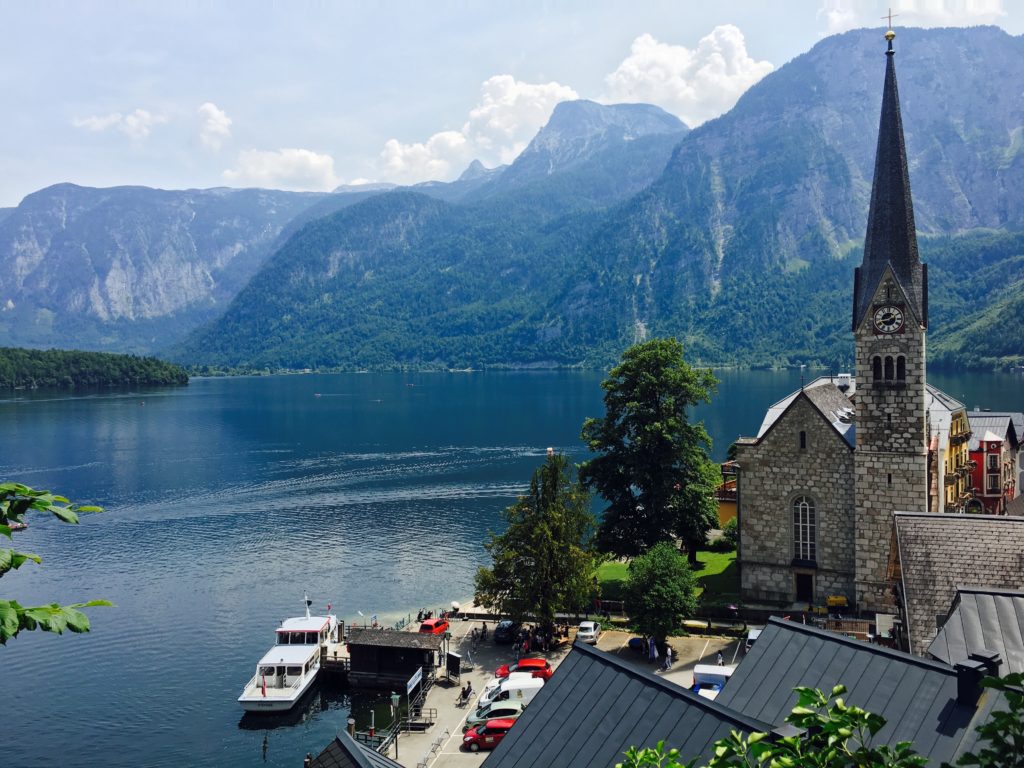 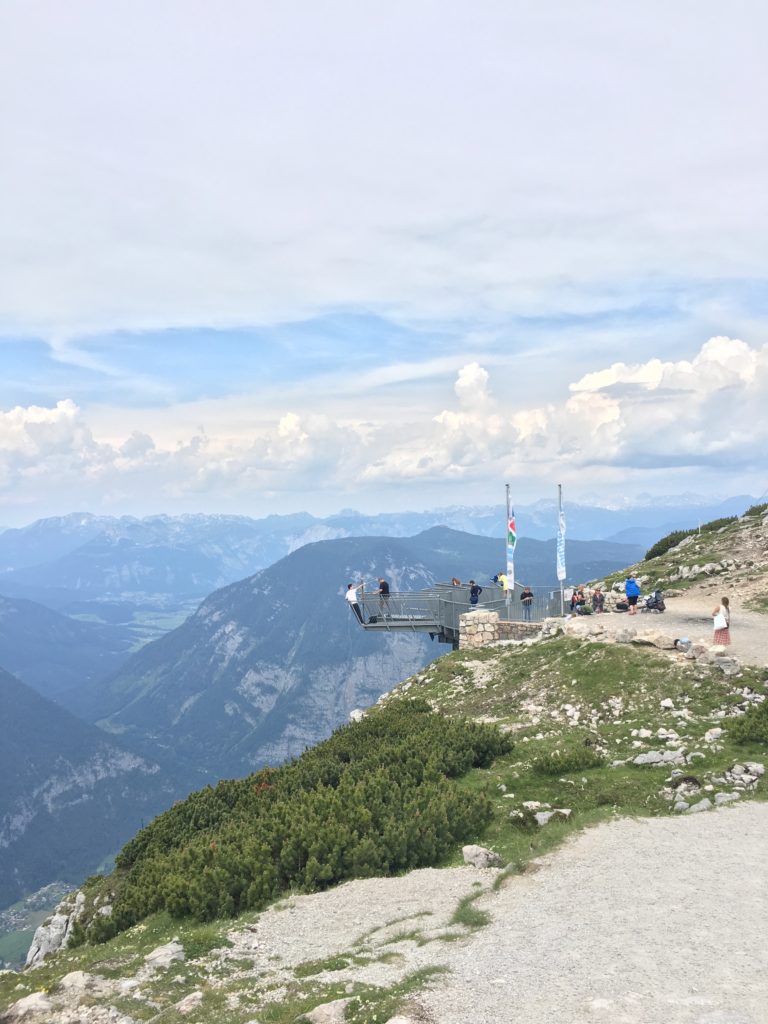 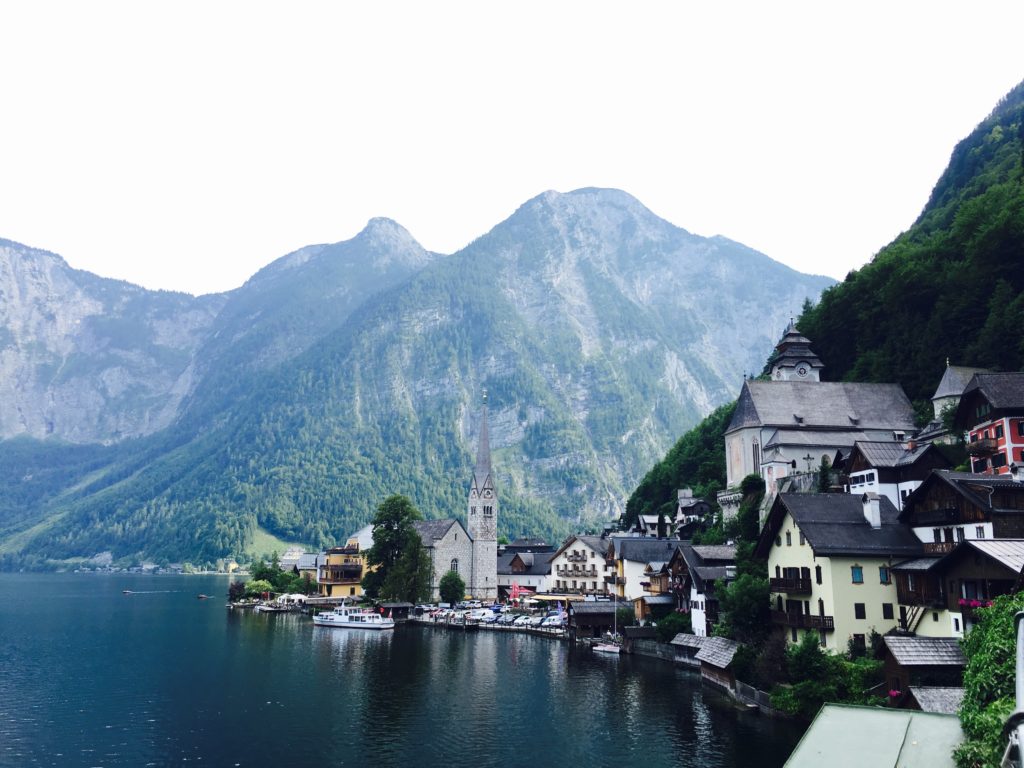 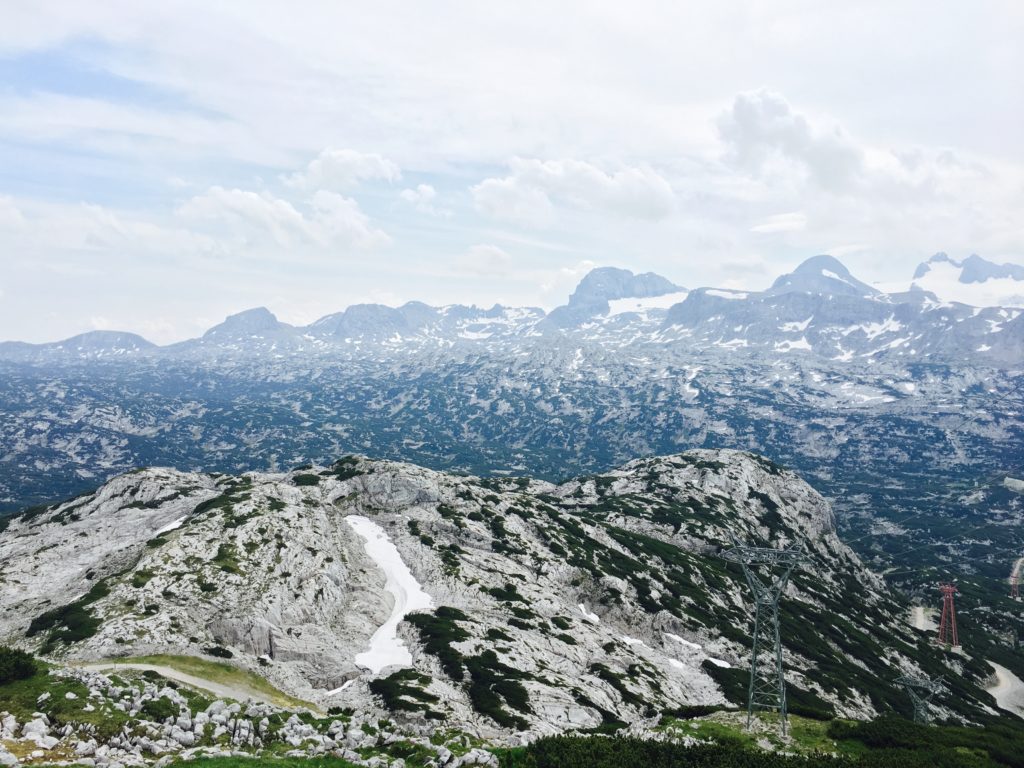 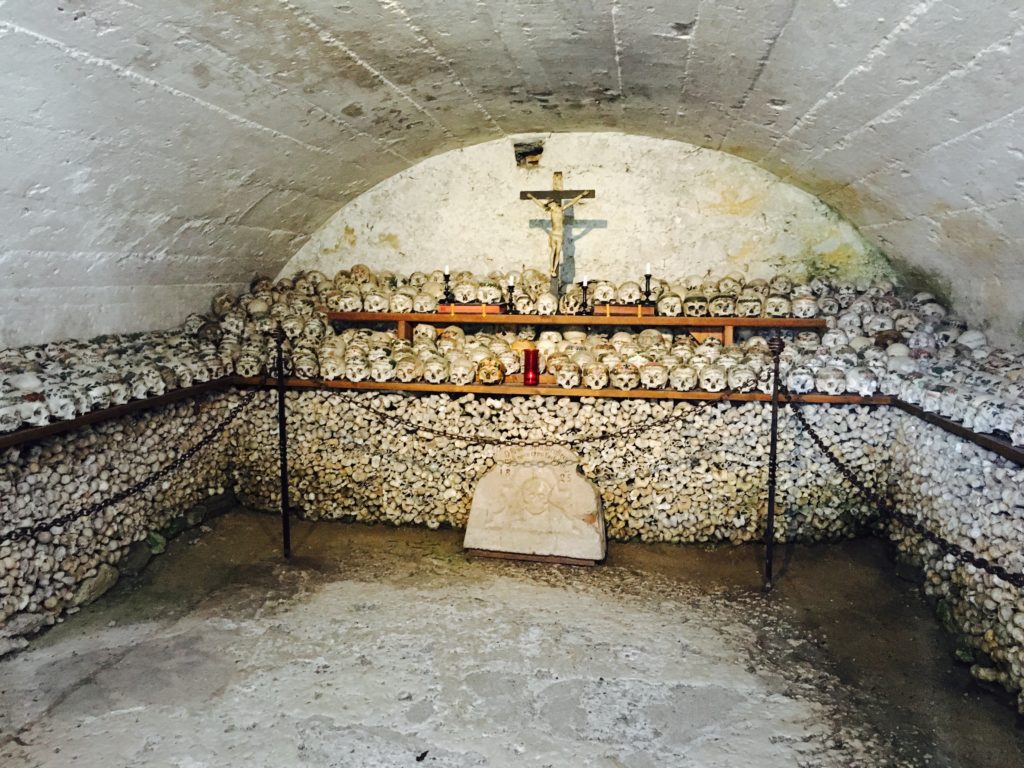 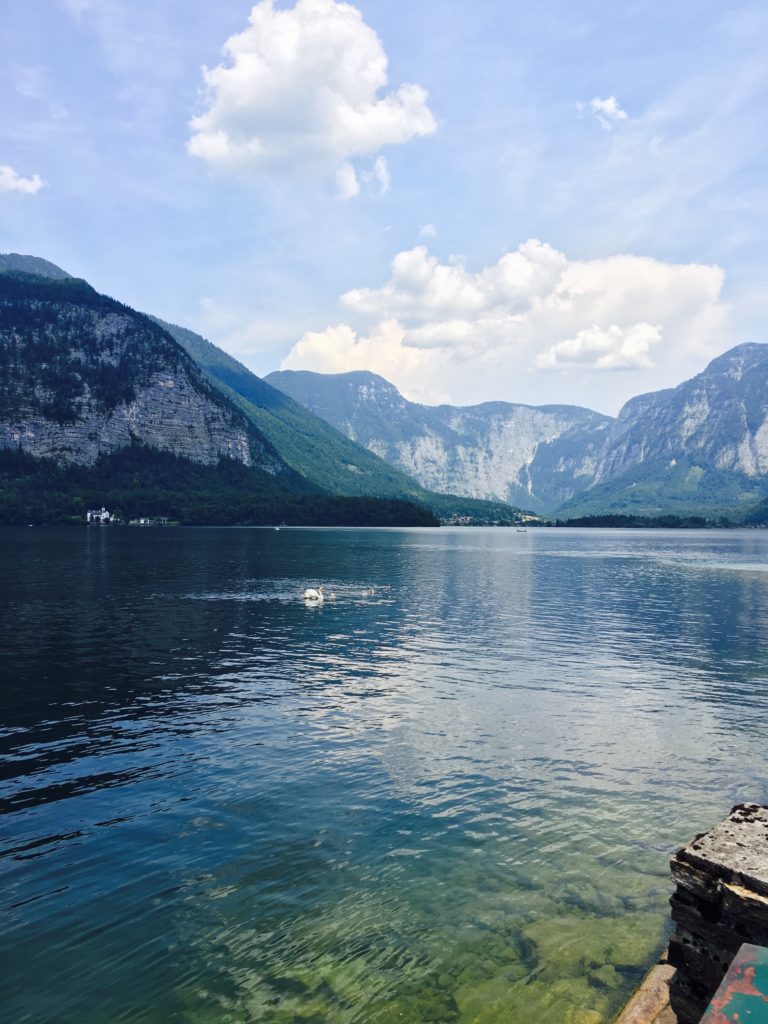 Absolutely beautiful – you should spend some time wandering around the town, grabbing a coffee at a cafe, and admiring the cute houses

Rent a paddle boat on the lake

In the summer, the lake is nice and calm and people spend time relaxing on the water

5 fingers lookout provides a great view and is interesting because there are five different points to walk on for a view (one has a glass floor, one has a telescope, one has a picture frame, one has an odd hole, and one has a piece resembling a diving board off of it but you obviously cannot go on this).

Getting there: take the 542 or 543 bus to the Dachstein cable car stop (you can ask the tourist office near the bus stop for the timetable. The tourist office is also near the salt mine funicular. If you take the ferry over from the train station, head left for about 5-10 minutes and walk along a “larger” street that partially goes along the lake to get to this part of town) – south part of town. Once you arrive at the cable car starting point, purchase your tickets. To get to the 5 fingers lookout, you need a round trip for the first 2 cable cars. Getting up will take about 20-30 minutes (including waiting time). Once you get off the second cable car, you will then follow signs that direct you to the lookout. It is about a 20-25 minute walk. Stop at the other lookout points as well while you’re up there.

There are three different levels accessed by two different cable cars. They run every 15 minutes (so if you want to go up two levels, you will take the first one and then you will have to wait about 15 minutes until you can catch the next one since they all leave on the :00, :15, :30, and :45.

The first cable car brings you to the caves (ice cave and normal cave).

The second cable car brings you to the 5 fingers lookout location (20-25 minute walk from cable car), another lookout, and some hiking starting points. We did not get to go hiking around here but I wish we could’ve!

Another cave at the first cable car level. We did not do this one either (can do this if you have more time).

This is a lookout point near the salt mine. You can access the sky walk by taking the funicular up from the main town area. The funicular runs frequently and only takes a few minutes to get to the top. Once at the top, walk a few minutes to the Welterbeblick lookout for a nice view

To access the salt mine, take the funicular up found in the south part of town. You can also hike up, but the funicular saves time.

The tour is quite long, lasting 1.5-2 hours. PLAN for this because we found the tour to be far too long and boring. They give you some clothes to put on over your clothes so you are warm enough in the salt mine as it is chilly. The tour is given in both German and English, but our groups was very large. There are two slides inside the salt mines which are cool. I would only recommend doing this if you are here more than one day and if it is rainy or bad weather outside. Otherwise, I do not know if it’s worth your time. I would’ve preferred to do the ice cave over this; just was too long. All the videos are given in German too, with very minimal English subtitles.

This spot, also known as the “bone house”, is part of St. Michael’s chapel. Inside there are over 600 painted skulls dating back to the 18th  century. This was a practice carried out largely in the 19th century, but it was also noted that the “bone house” existed because there was not enough space in the church’s yard.

Lots of areas to hike around this region

If you have an inkling for adventure and are not afraid of heights, try paragliding in the area. You are paired up with an experienced paraglider and head to a somewhat steep area where the parachute is laid out on the ground. When all is ready, you start running down the mountain and before you know it, are floating in the air with some breathtaking views. 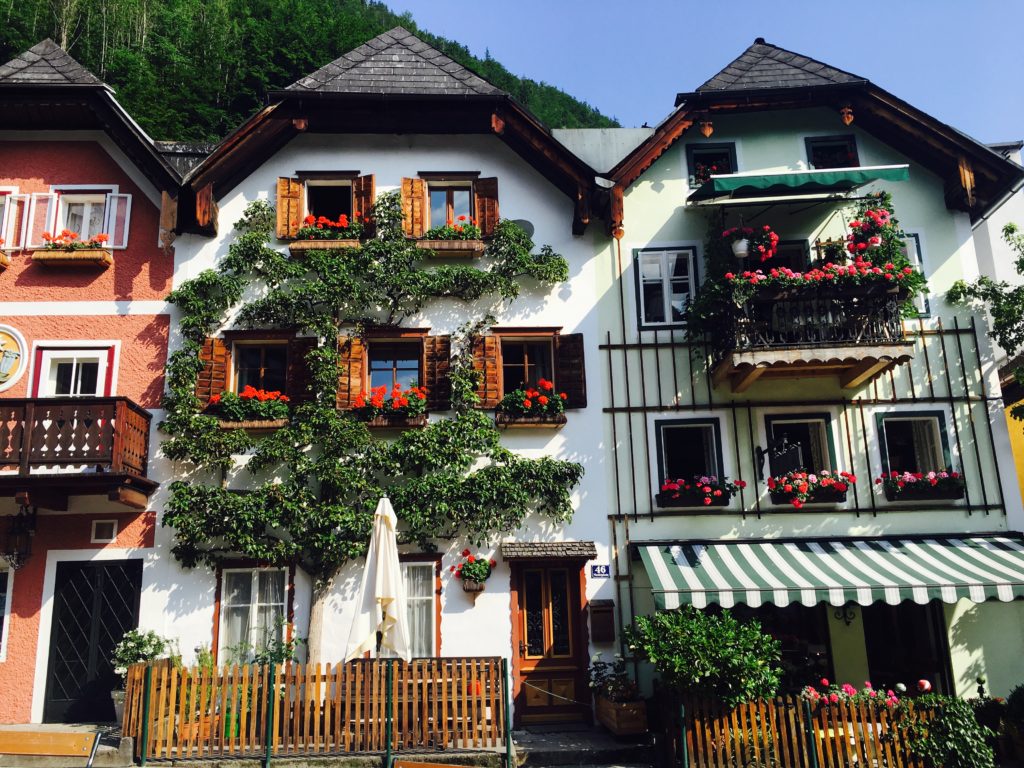 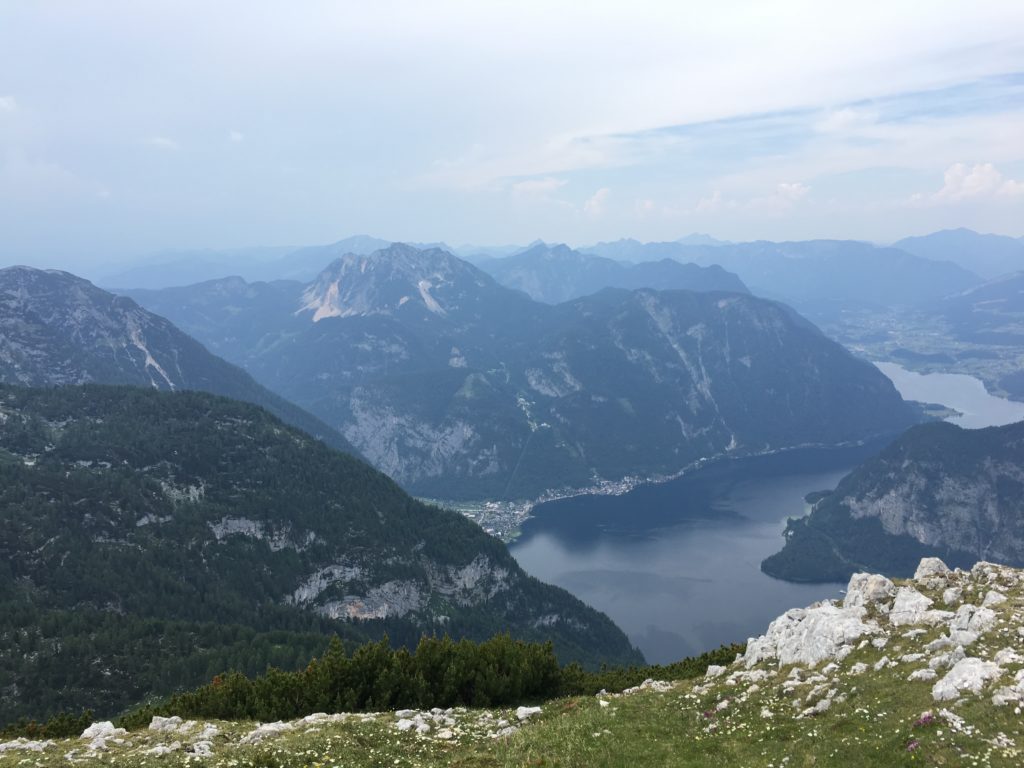 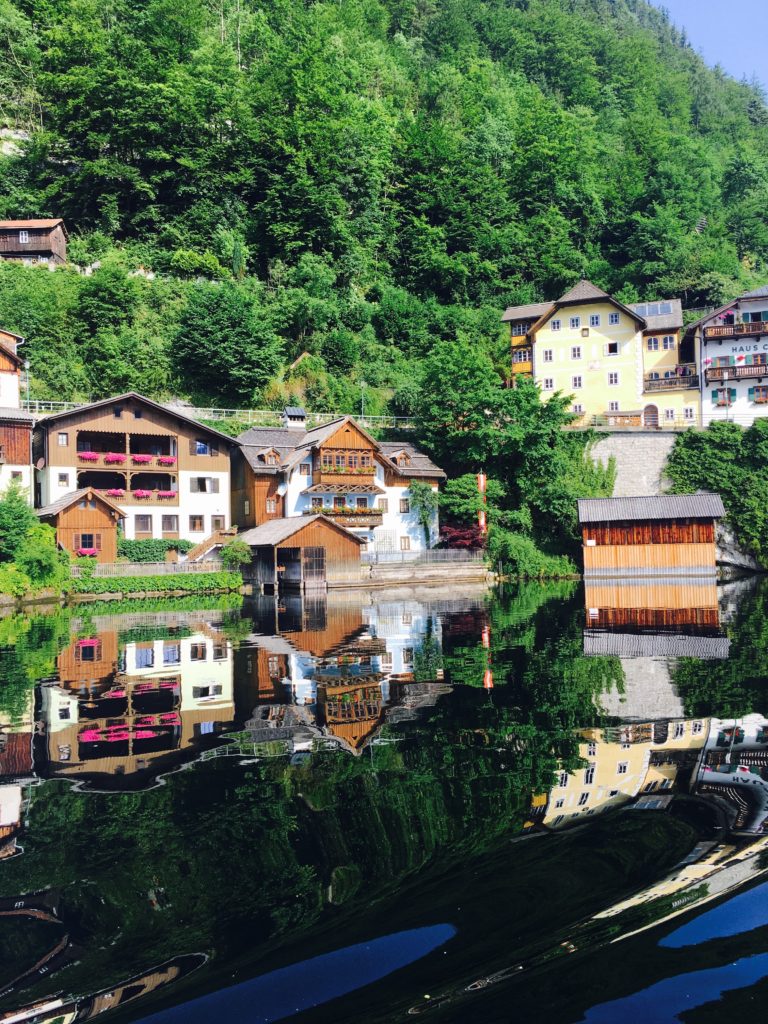 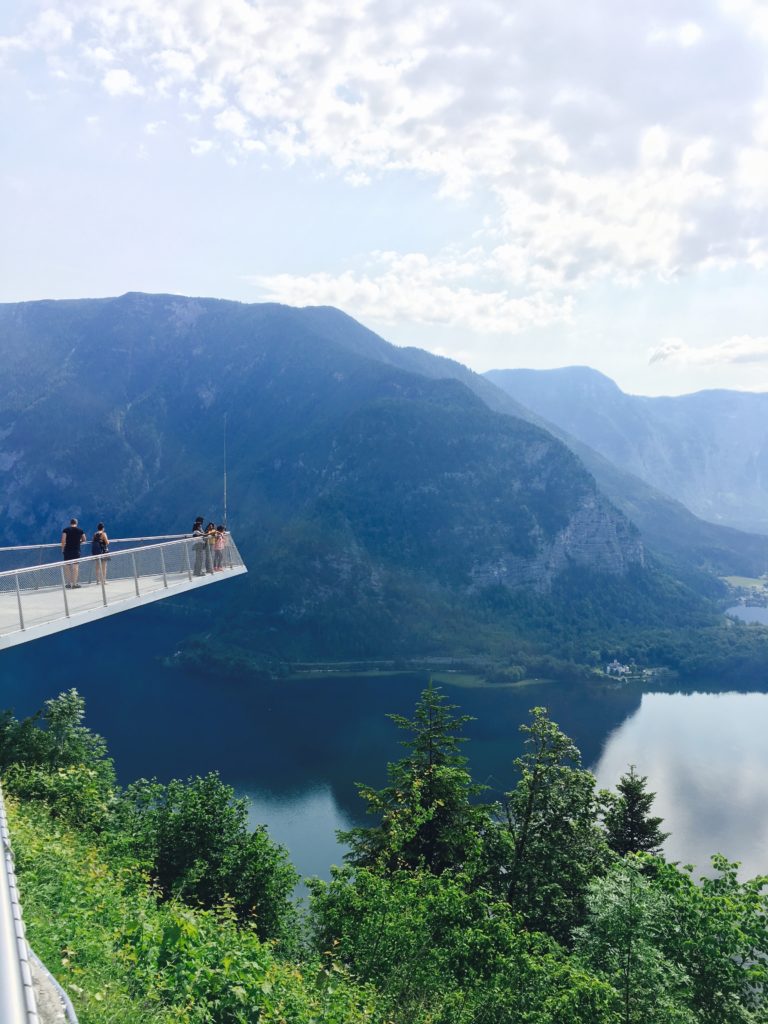 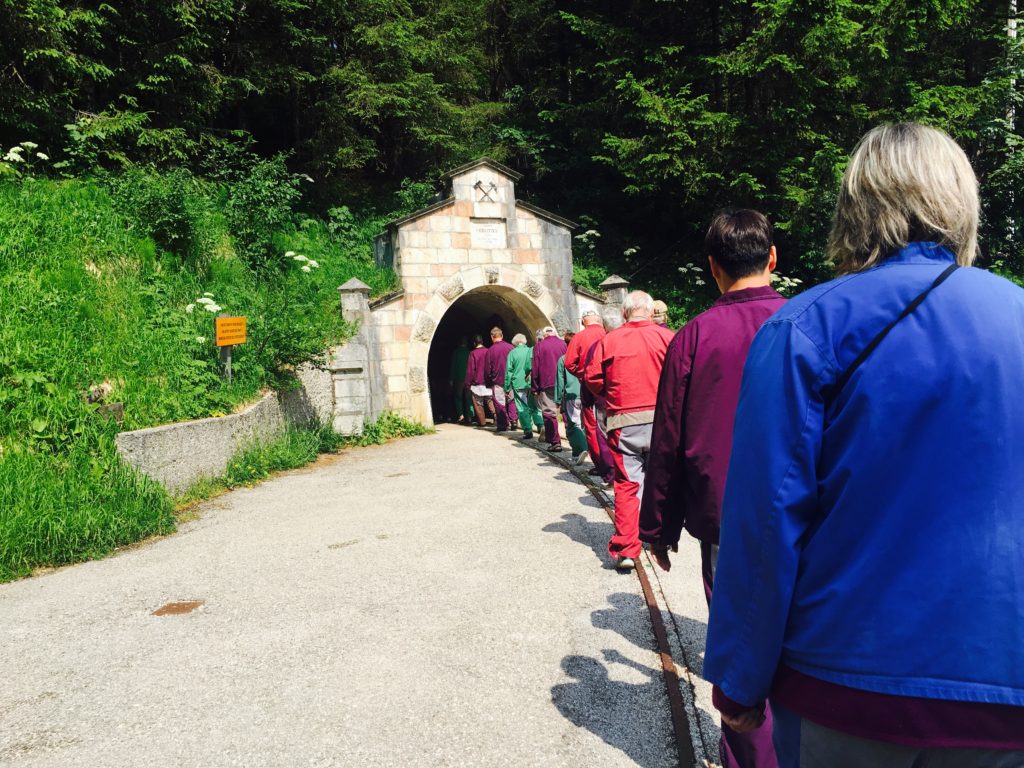 There are a variety of cafes and places to grab a bite to eat in the small town center. Consider stopping somewhere along the river or somewhere you can sit outside and enjoy the quaint town.

Hallstatt was absolutely beautiful, and a great town to check out in the summer. It is a tiny town, but has a great feel to it. It’s one of my favorite places, as it was peaceful and gorgeous. I would’ve loved to spend a night here to reduce the single day travel time required to get here from Salzburg, and to provide more time to do some of the outdoorsy activities. The weather is an important factor as most activities are outdoors. It would be challenging to find a lot to do if there is bad weather.