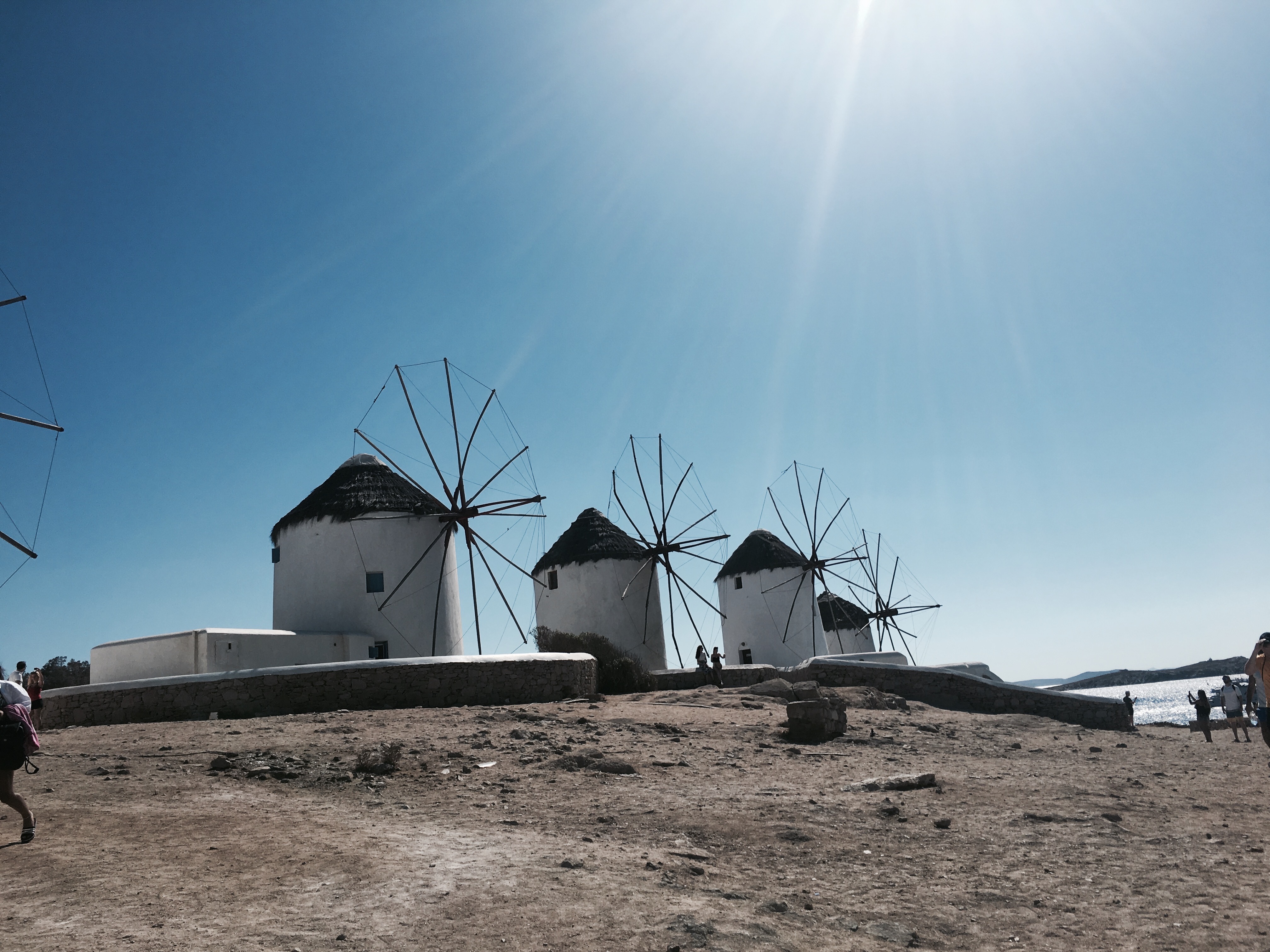 There are a series of companies that operate in the Greek Islands. We used Hellenic Seaways and traveled from Santorini to Mykonos (which took about 3 hours, but this was the FAST ferry) with two stops on the way.

A few companies: possibly more, these are just ones we saw

Note: important to figure out where your ferry arrives (there’s the new port and the old port in Mykonos. They aren’t THAT far away, but it’ll affect how you get to your accommodation). Hellenic Seaways always goes to New port (and I believe most ferries go to new port). That being said, it’s a bit further from Mykonos Town so you’ll need a taxi or bus or arranged pickup. We needed a taxi, which is a problem in Mykonos because there are about 30 taxis for the entire island. Thus, you may have to wait awhile especially when there’s an entire ferry full of people trying to get places. Our airbnb warned us of this ahead of time and recommended that, if arriving in the new port, line up at the front of the group waiting to get off the boat. Then, when you get off, go straight and then slightly left to see the taxis. Also, if you do not have a lot of luggage, bring that upstairs with you because it’ll be a mess to try to get it with the crowds at the end (at least that was the case for us) and trying to get to the front. We were glad we brought our bags upstairs with us.

The ferry from Athens (I believe) takes about 2.5 hours IF it’s the fast ferry, but do not quote me on this!

In high season, definitely book your ferry tickets ahead of time. For ease and less worry, I would recommend booking them ahead of time regardless. However, in a less busy time you may be able to just go the day of and get tickets

Airport is very small and frankly very gross. We flew out of Mykonos. Note that because Mykonos is known to be windy, flights can often suffer delays, but ours was not too delayed. Most other flights before ours though had longer delays since it was a particularly windy day

These are SCARCE as a I mentioned. Thus, we only took a taxi to get from the ferry dock to our airbnb and then leaving our airbnb to go to the airport

The bus system works well to get to the beaches. Most leave from Fabrika Square which is on one side of town (side near the windmills) and others leave from around the Old Port. We only used the ones that left from Fabrika square. Check online at Mykonosbus.com for schedules. In the summer, most were pretty frequent (every 30 minutes to 1 hour depending on the beach). The bus costs 1.80 for a one-way ticket during the day and 2.30 in the late hours of the night/early hours of the morning. Buses, like in Santorini, are big coach buses

Unlike Santorini, I personally would NOT recommend renting one in Mykonos. The roads are a lot thinner, and drivers are even less careful. Often roads look like they are one way and then you see a giant bus coming your way driving the opposite direction. The roads are also not as nice and well-kept as those in Santorini. And lastly, people are known to drive their ATVs after too many drinks. In fact, a lot apparently take them to the club and then drive home. Very dangerous. Nevertheless, there are tons of people who do choose to rent vehicles and there are plenty of places to do that so if you choose to do that, it should not be difficult.

You can get around by foot in the town (can’t drive in the heart of the town anyway). You can also walk between a few of the beaches, which is helpful if the bus to the beach you want to take is not for another 45 minutes but there is one going to one nearby in a few minutes). I will note these below in the expanded description of the beaches

This mainly depends on what you want, but I would recommend staying either in (or walking distance from) Mykonos Town or near a beach.

This is where most of the restaurants are and where a lot of the partying at night is.

We stayed near Mykonos Town, which was nice. However, as someone who likes to spend a lot of time at the beach, I would’ve preferred to be closer to a beach. We would’ve had to take a bus (or taxi) into the town to get meals though if we did not want to eat at or near the hotel too often and for at night if we choose to go out

Many different beaches in Mykonos. The main ones that most people visit are on the south shore. They are separated by rocks so it is not like it is one long beach that connects a bunch with different names. However, you can walk between some of them rather easily.

I would’ve liked to do this and I would’ve stayed near Platys Gialos I think after knowing and understanding the beaches more. From here you can easily walk to Psarou Beach, Paraga beach, Agia Anna and a bit further to Paradise Beach. However, we would’ve need to go into the town for a good sunset view and for some dinners. Again, it depends on preference though! 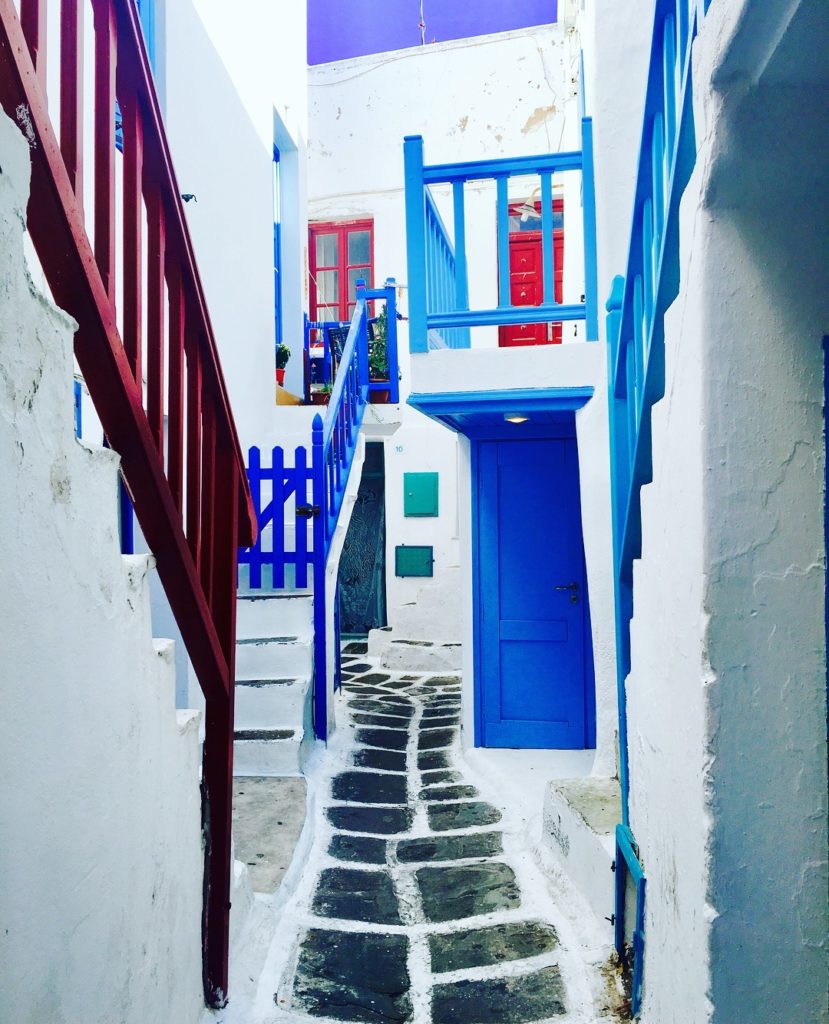 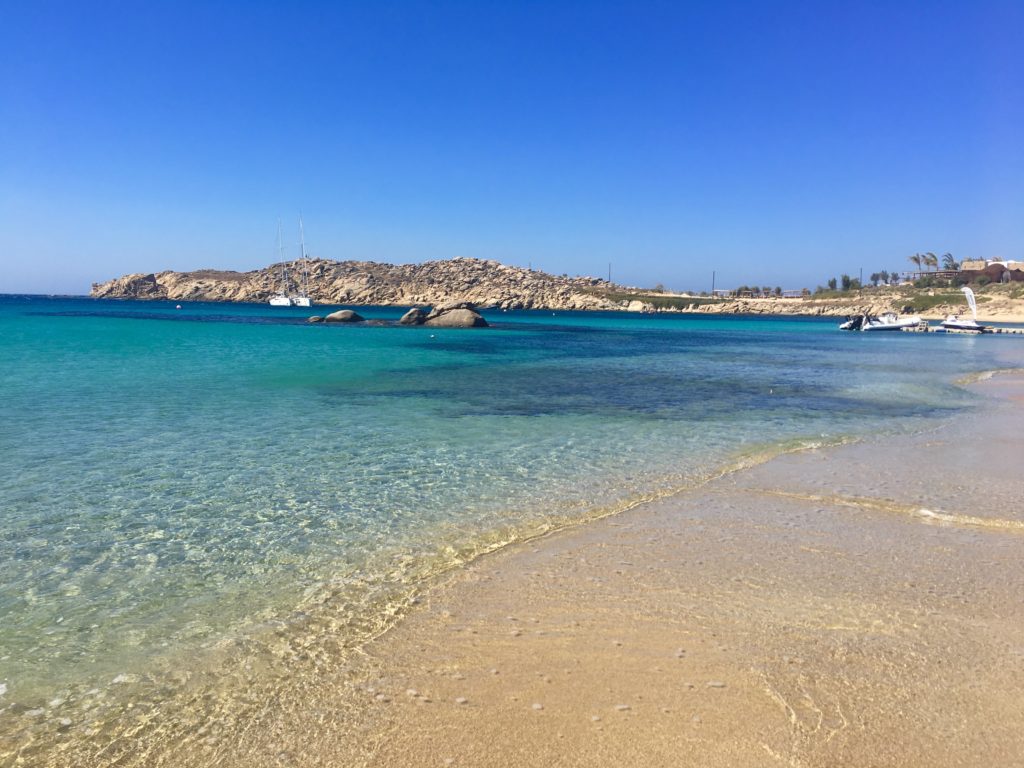 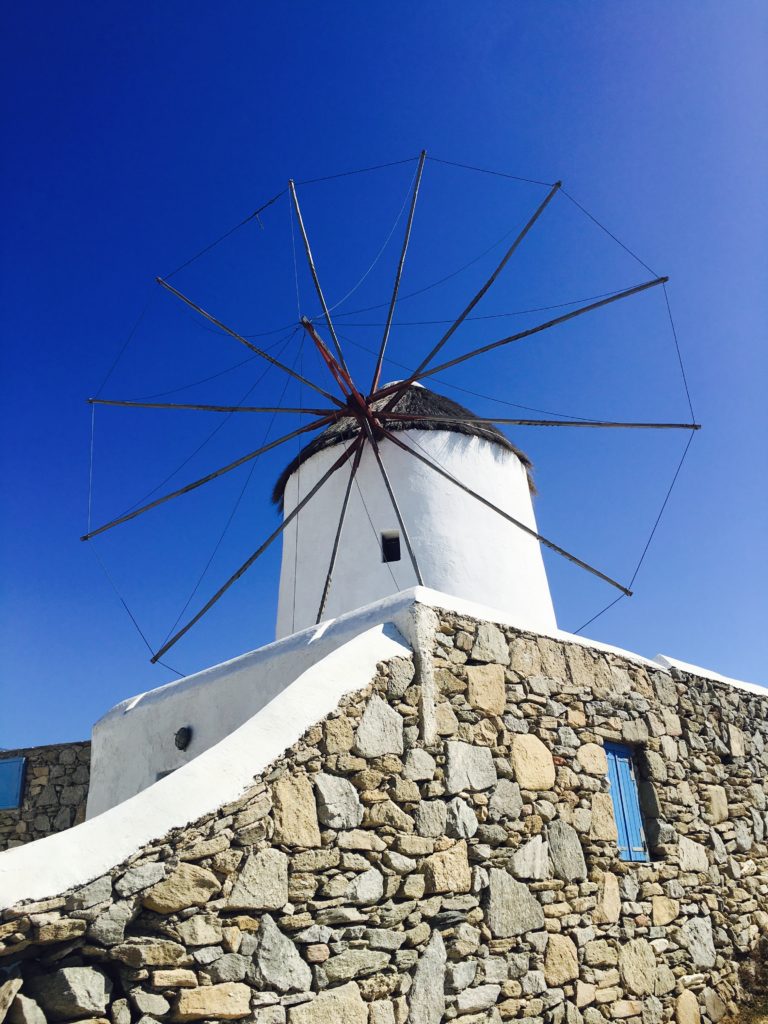 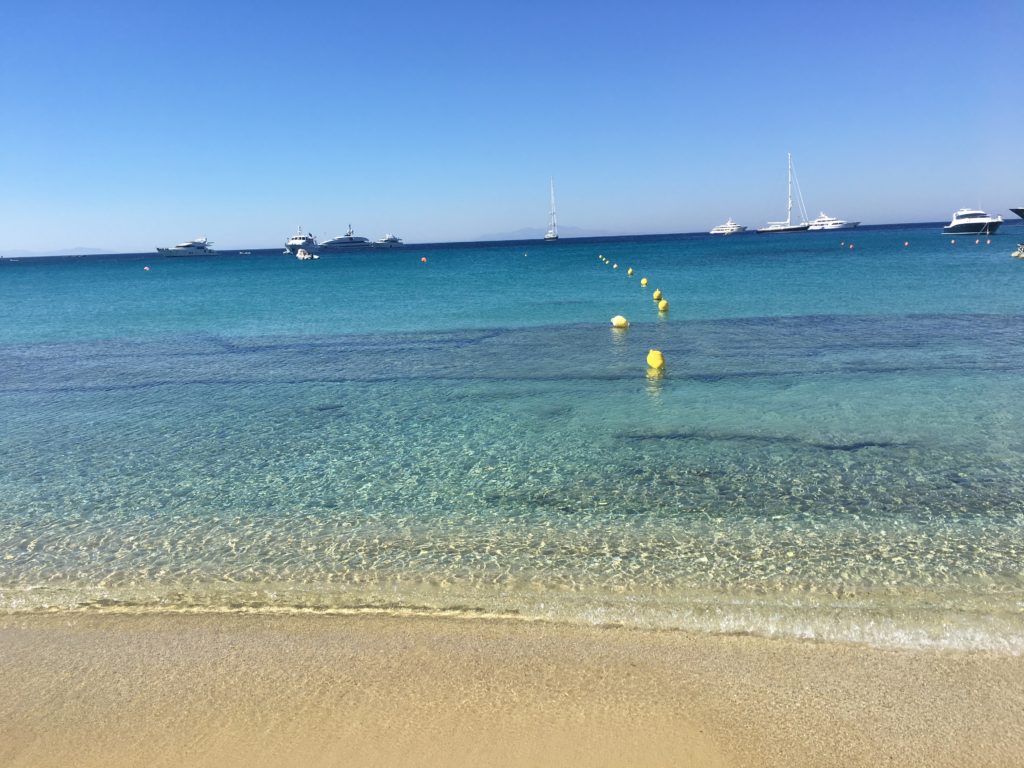 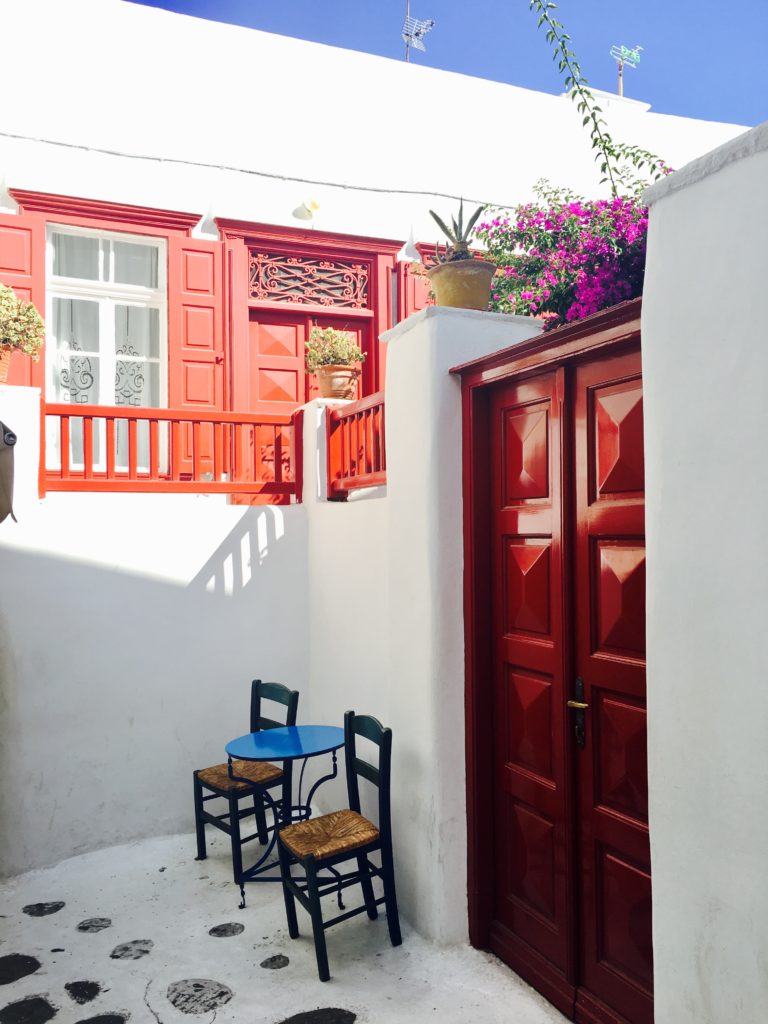 Longer beach with many restaurants and a mini mart. (The bus stops at Psarrou first, then here from Mykonos Town.)

Busy and beautiful but more expensive (we found) than Platys Gialos. The beach gets a bit rowdier with a different crowd around 6:00 pm as the beach bars start playing louder music and the younger crowd has made it past their hangover from the night before

Young and very lively beach with the Tropicana Beach Bar. The party goes throughout the day into the night and keeps on going until the early hours of the morning as there’s a large club here.

Smaller beach but lively. A bit harder to get to but there are some boats that go here from Platys Gialos and Paradise Beach. Known as the most gay-friendly beach

Longest beach on the island

You can walk between Psarrou, Platys Gialos, Agia Anna, Paraga, and Paradise (aligned in that order) on footpaths (not by beach).

What beach you choose just depends on the vibe you’re looking for! You can’t go wrong, the water is beautiful! We took the bus around 10/10:15 each day and we were situated on the beach by 10:30/10:45. We were clearly earlier than many since the beach did not start to get really busy until 1 or 2 in the afternoon

Cute town with white buildings, colorful doors and railings, and stone ground. It’s very nice to walk around in, and easy to get lost in (we did multiple times). There’s a lot more shopping as it is a bit more high-end than some of the other Greek islands and many restaurants, crepe places, quick Greek food, and ice cream places.

Right near Little Venice and along the water. It’s hard to come to Mykonos Town and miss the windmills. You will see them at some point

A lot of people choose to do some type of boat cruise (either during the day going to another island and just around the area, around the different beaches, sunset boat cruise, etc)

Gyros place in Mykonos Town that is delicious!

Great restaurant with a perfect view of the sunset if you get the right table (the table outside near the water was where we sat!). Pricier and make a reservation to make sure you get the spot you want if you are trying to watch the sunset. Careful, it is windy here! We almost lost our menus and Sam ended up knocking her sunglasses off her head into the water and had to chase them down.

Lots of cocktail bars along the water!

Didn’t make it here but supposedly great view for sunset

On Paradise Beach and quite a party over there

In Mykonos Town and people party here all night

On Paradise Beach and huge party spot all night; you’ll likely have promoters coming up to you at the beach trying to sell you tickets with a cheaper price if you opt to show up a bit earlier 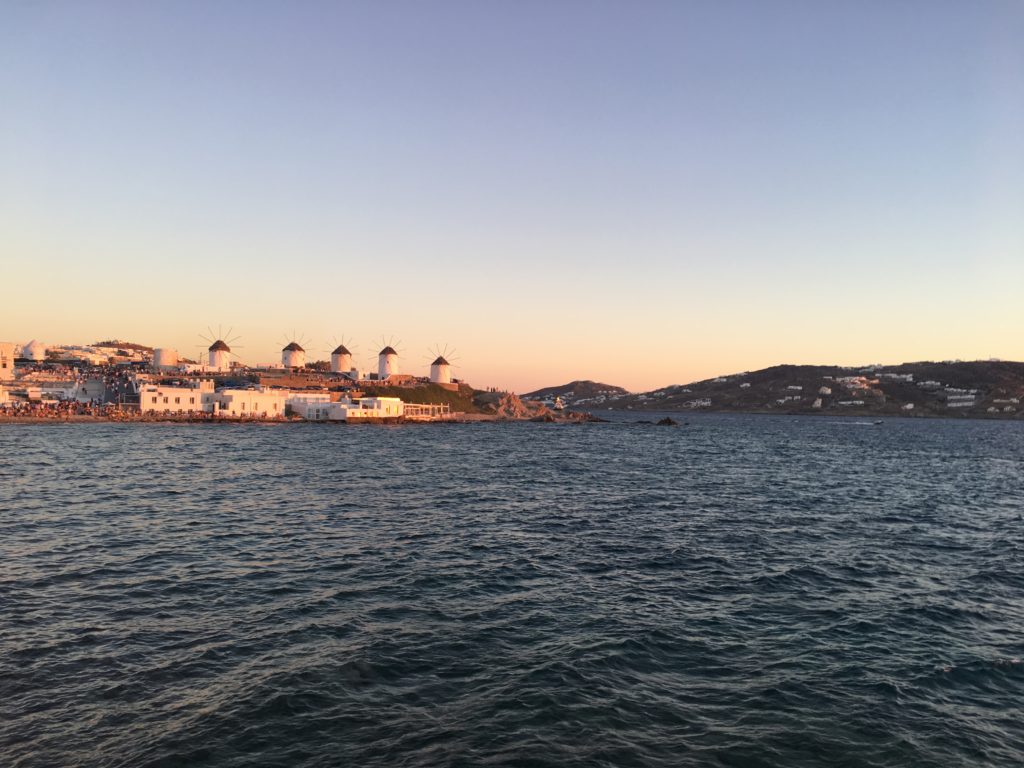 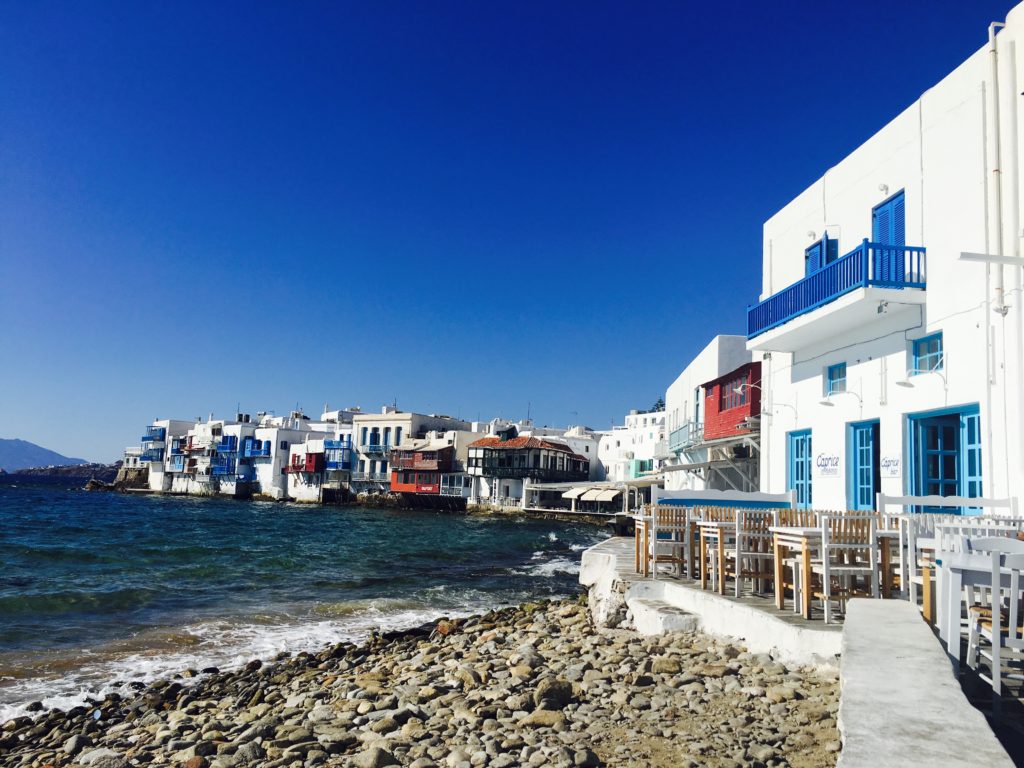 Overall, I did not love Mykonos. However, if I had come with a group of friends looking to party, I think I would’ve felt differently. It draws a more Cancunlike/Ibiza scene/type of people there. The night life did seem very fun though. This was around day 55 of my travels so I was getting pretty exhausted. Nevertheless, some people absolutely love it here and have the time of their life! I would not come back just for the beaches though; I’d rather find another Greek island to visit!

Much more expensive, I found, than Santorini to a point where it annoyed me. The first day we were able to find beach chairs for 10 euros but the second day the cheapest we could find was 15 euros and we had less amenities than the day before. For this reason, you’ll likely want to stay at one beach for most of the day. Some of the sets of beach chairs (2 beach chairs with an umbrella were 50 euros!). The front rows were sometimes more expensive than the further back ones and if you don’t want an umbrella, sometimes you do not have a choice. Fortunately, we got seats without an umbrella the second day and with one that folded in the first day.

WATER: we drank bottled water while on the islands in Greece. We read mixed reviews, some saying you could drink the water and that people often just did not like the taste and others saying you should avoid it. Thus, as large 1.5L water bottles were only 1 euro at most places, we opted to just play it safe and drink bottled water. We re-stocked often and had no problem finding water

High Season: as mentioned previously, I would HIGHLY recommend avoiding high season. Of course, this isn’t always possible (my situation), but you’ll get much better prices and less crowds at other times of the year (I’d say May and early June and then September and October would probably be better times to visit). More things will be closed if you go in the winter, and you’d need to check the weather