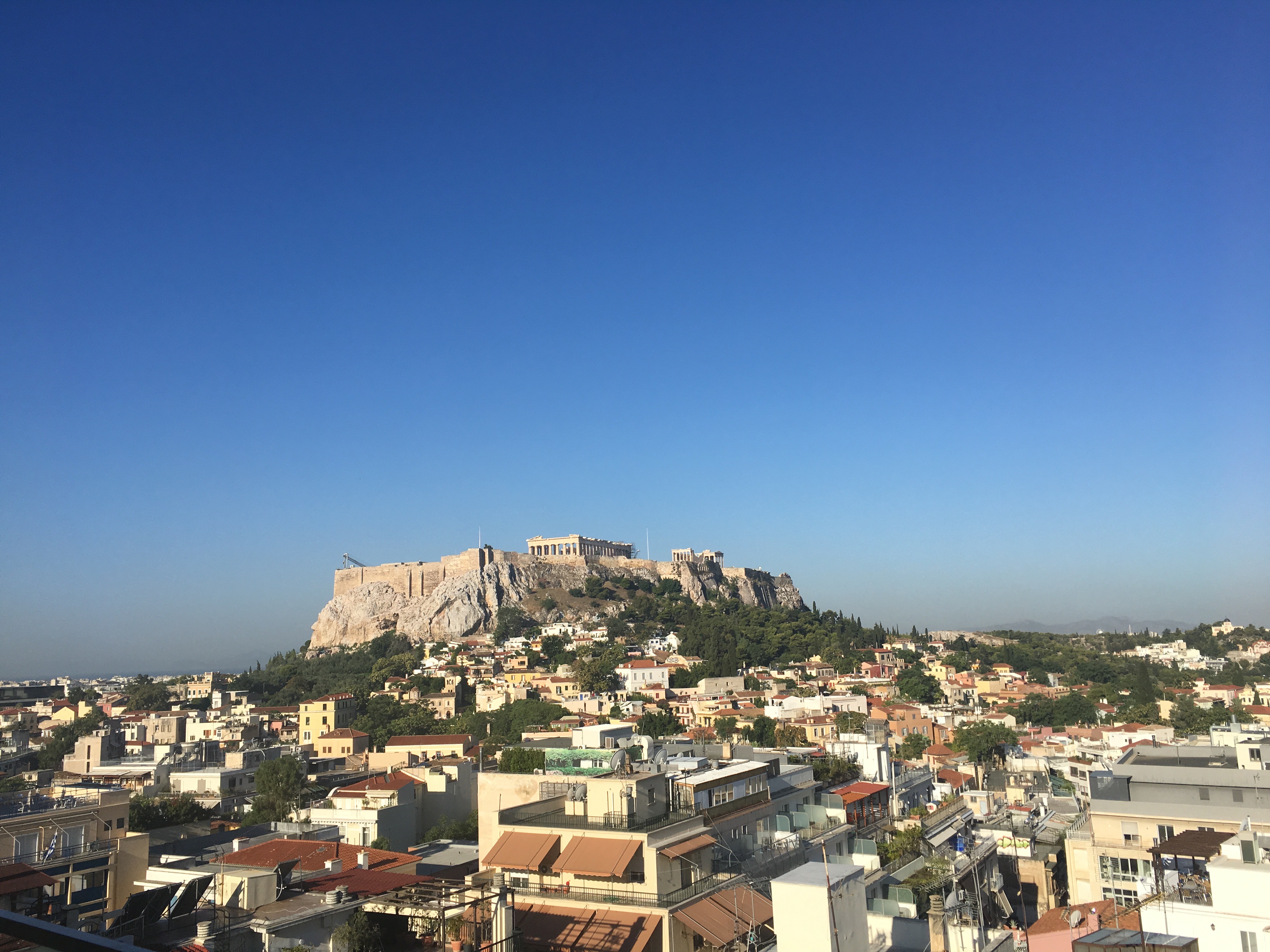 Athens is your main access point when traveling to Greece. There are lots of flights and most people fly through here to access the islands.

To get into the city center, a taxi will cost you about 35-50 euros from the airport

You can see all the main historical sites and also check out some different neighborhoods on foot. We walked everywhere once we were in the downtown area.

Stay a close walking distance from the main sites

We stayed near Syntagma square at Electra Metropolis Hotel (fancy), which was perfect as it was a focal point and pretty much everything was about a 15-minute walking distance from here (with one or two exceptions ~mainly Mount Lycabettus was a bit further) 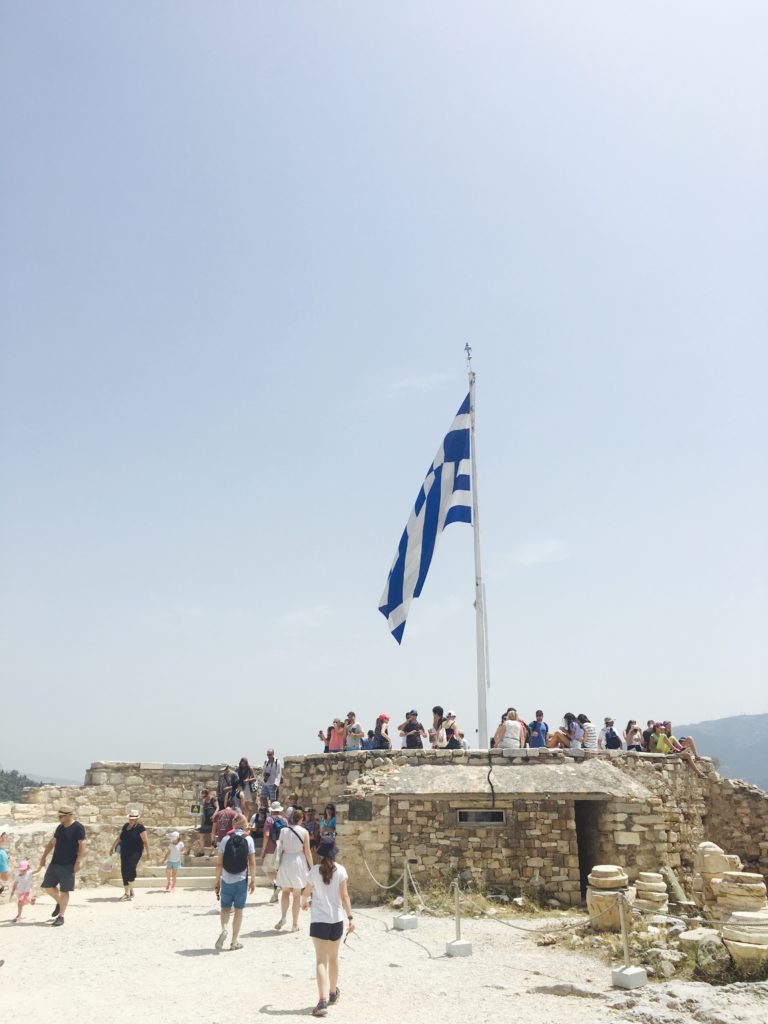 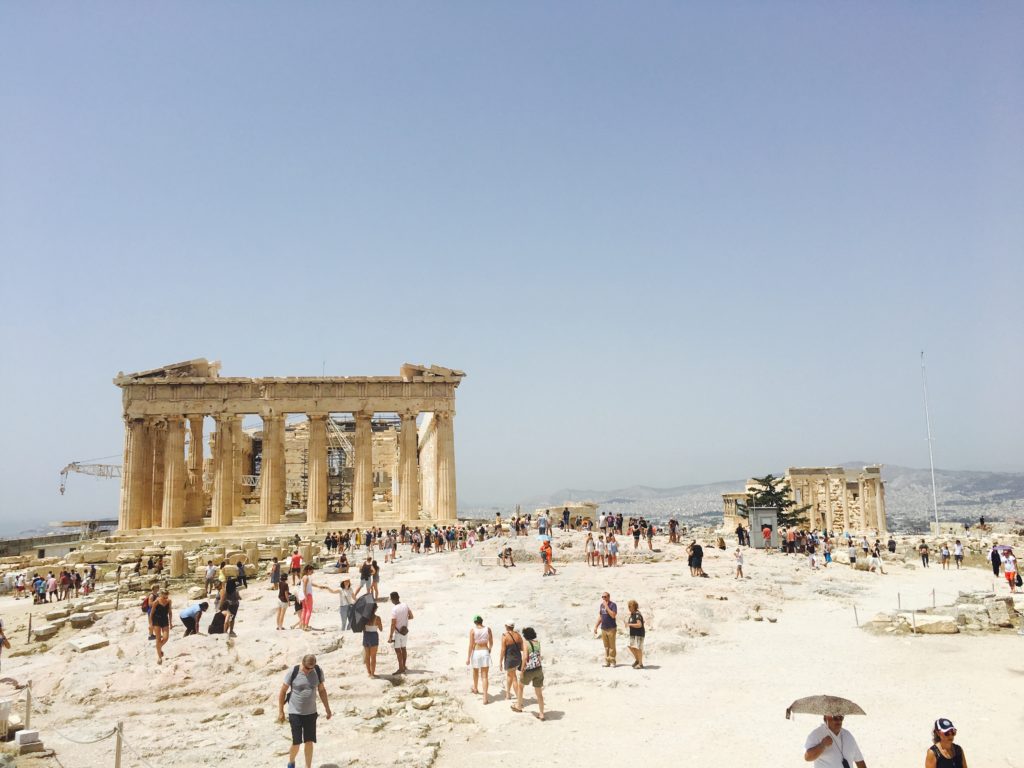 Another neighborhood (near Ancient Agora)

Nice street to walk down in Plaka ~ hope that spelling is correct, but we stumbled upon it on accident

Roman agora and Tower of the Winds

Right near Temple of Olympian Zeus

Hike up – takes about 20 minutes with nice view points along the way. If you’re dressed in appropriate clothing, I would recommend this! It’s not hard if you enjoy activity, but definitely would not be fun to do in 90-degree heat while in a dress. We did it in the heat, but wore athletic clothing and it was no problem!

You can go up around sunset to watch which is really nice! We were there in high season so it was very very busy up there and you could honestly watch it from one of the points on the way up, which would be nicer. However, still worth checking out the view at the top

We walked from our hotel (near Syntagma Square) and then hiked up. This took about an hour total

Quick Greek meal and it was pretty good

Greek place located in Plaka – it was alright, but we needed food

Best gelato in Athens (so good! I got cookies and hazelnut which is called nocciola)

Dinner with a view!

On top of Mount Lycabettus

EAT Greek food: Gyros, gyros platter, kebabs, soulvaliki, and fish as you’re right by the water for most places you visit in Greece (below are what they typically include)

Gyros platter – Shredded chicken or pork, tomato, onion, txatziki sauce, French fries and pita pieces, but all laid out on a platter so you make it yourself/usually has more food than just one gyro

Kebabs – Meat grilled on a stick 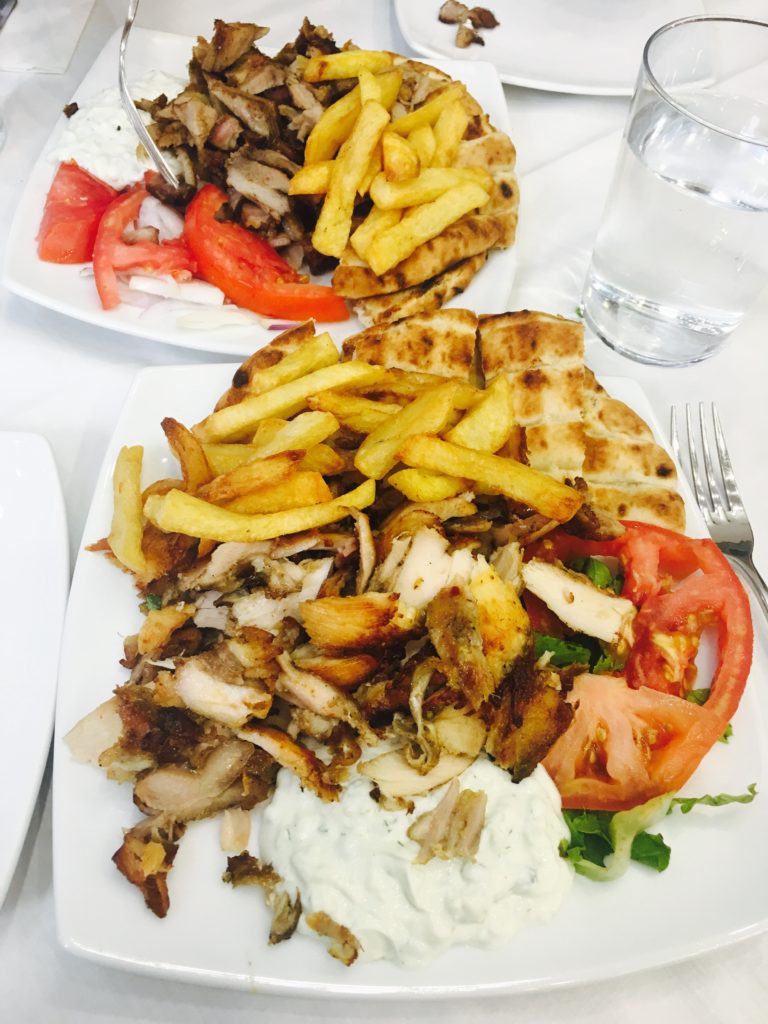 BEWARE: Athens is not a “nice” city. It is very dirty, trash everywhere and covered in graffiti. However, I was expecting this so I was not disappointed. I was there to see the ruins so I was not expecting much more.

High season: July and August are very busy in Greece. I would recommend avoiding going at this time as crowds are larger, prices are higher, and it is very hot (almost 100 degrees when we were there!). It is dry though so no humidity, which helps a bit. However, we powered through. If you go in high season, just be ready for crowds and the heat.

You really only need one day in Athens. You could spend two days and visit more of the neighborhoods, but I’d say just do one and get to the islands! We arrived in the morning (around 10 and then explored in the afternoon since we had an early flight the following morning)

COMBO TICKET: when visiting the Acropolis, you can either purchase a ticket for the Acropolis grounds (20 euros) or a combo ticket (30 euros), which we did, that includes:

Acropolis and its slopes

Ancient Agora (and the museum of the Stoa of Attalos)

Roman Agora (Tower of Winds is here too)

If you choose to do the combo ticket AND you go in high season, consider visiting the Ancient Agora first as we had to wait in like 30 minutes to buy tickets at the Acropolis, but you could also have purchased the combo ticket at any of the other sites and then skipped the ticket line at the Acropolis. Nevertheless, I liked the order we did since we saw the Parthenon at the beginning and from up on the hill, you can get your bearings because you can see a lot of the sites you’ll go see later (like Hadrian’s Gate, Temple of Olympian Zeus, Panathenaic Stadium, and the Ancient Agora). Also note, you cannot purchase these tickets in advance. I think the only way around that would be to book a formal walking tour.

Bring student ID’s as they give you ½ off at a lot of the sites!

If it’s hot, I would recommend wearing comfortable clothes (to sweat in). I saw so many people who dressed really cute, and they looked great, but they also looked absolutely miserable in the heat as they were trying to stay cool and not sweat in their nicer clothes!

Overall, Greece is not expensive, but it can get expensive (for travel and accommodations) during high season or in highly tourist areas where the companies can take advantage of tourists 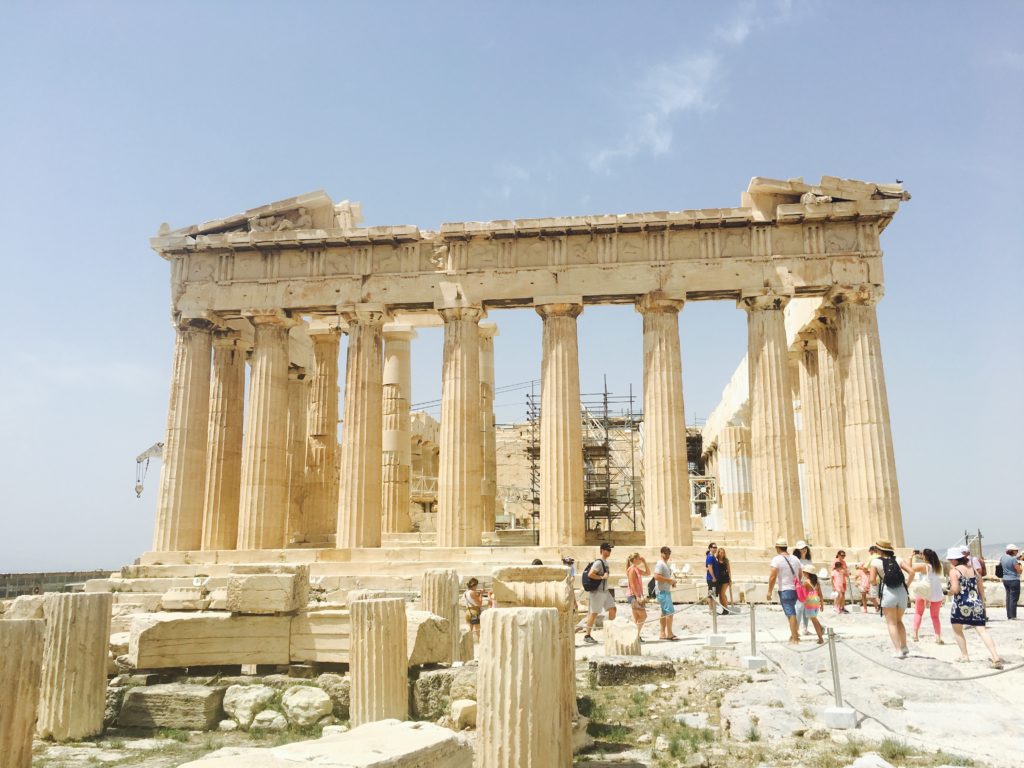 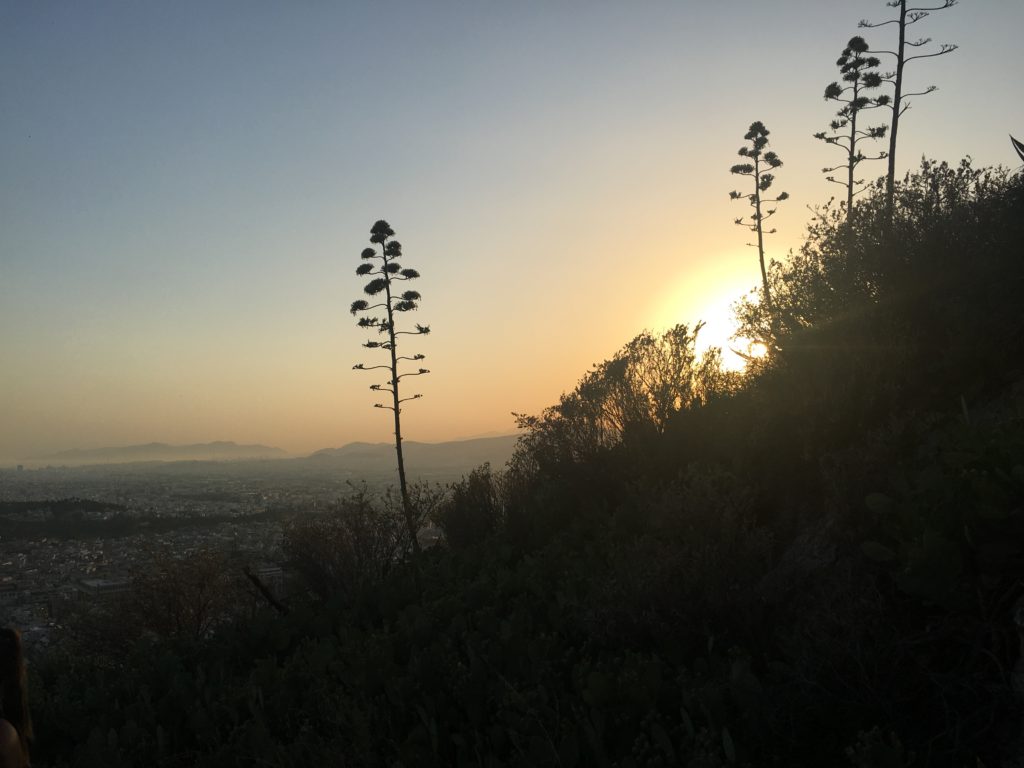